Shindico is pleased to announce that the Reenders Drive extension opened to traffic today, Thursday, December 3, 2015. The new road extension, located in front of Shindico’s Shops of Kildonan Mile development, is part of a multi-million dollar investment in infrastructure in West Transcona. Four lanes are now completed on Reenders Drive, extending the road from Stapon Road to Peguis Street. A further two lanes will be constructed in 2016. LDS (Land drainage system) has also been installed, sufficient to serve the road, and adjacent developments.

The extension and widening of Reenders Drive benefits the entire East Winnipeg area. Nearby Regent Avenue is a densely developed thoroughfare and subject to extremely high traffic volumes. Reenders Drive, connects to Lagimodiere Boulevard, and provides an alternate route to the area’s retail and residential developments.

Shops of Kildonan Mile will be the first major retail expansion in this dense retail node in over a decade. An exciting new development that will bring over 340,000 sq. ft. of new retail to the heart of east Winnipeg’s dominant shopping hub..The Regent and Lagimodiere node is the largest shopping destination in East Winnipeg with over 3 million square feet. 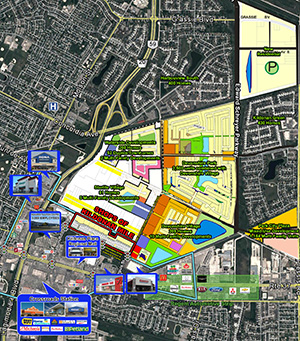 Located in the heart of this dense retail node, Shops of Kildonan Mile is across the street from Kildonan Place, a regional shopping centre with over 100 shops (4.9 million customers annually) and the Winnipeg Taxation Centre, one of Winnipeg’s largest employers with over 3,000 employees. Several major national retailers are nearby, including Costco, Home Depot and Walmart Supercentre. Club Regent Casino & Hotel is just down the street (1.6 million visitors per year).

Shops of Kildonan Mile’s built-in customer base draws from the surrounding residential development and significant employment lands nearby with large daytime populations (St. Boniface Industrial Park and the Symington and Transcona Yards).

Surrounded by thousands of new single and multi-family homes that have been approved and are under construction, the proposed infrastructure improvements will provide much needed roads and access for this dense, vital, and expanding area of Winnipeg. Future infrastructure improvements include significant upgrades to Peguis Street (widening to four lanes), providing excellent access to residential developments to the north.